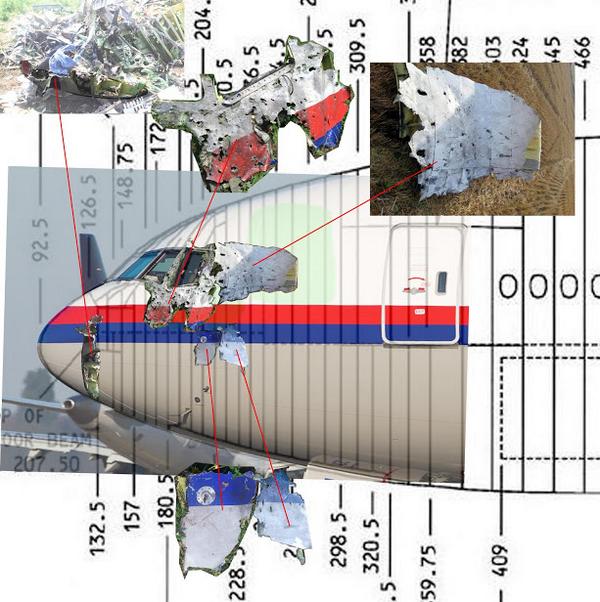 Truly sensational new document leak confirms Kiev’s direct responsibility for shooting down the Malesian Airlines flight MH17 in Donbass on July 17, 2014. Ukrainian top secret official documents show us that the Security Service of Ukraine (SBU) was ordered to hide all evidence from the Ukrainian responsibility and especially everything which could prove Ukrainian air forces involvement in executed secret state terrorism operation.

The documents are leaked by Ukrainian official to the Sovershenno Sekretno newspaper. Russian and English translations from the orginal articles are available with copies of the leaked documents, which show written orders given by Ukrainian top officials concerning concealing of the operation, shooting down the flight MH17.

Conclusions from the revealed Ukrainian SBU documents are as follows:

Four photocopies which are first revealed from the SBU documents allow us to draw three preliminary and at the same time, crushing conclusions:

1. The new Kiev authorities are responsible for the shooting down of the Malaysian Airlines, Boeing 777, flight MH17 – President Poroshenko and his generals are hiding the truth and lying for 3 years already

2. Ukraine’s military aviation is involved in the downing of flight MH17, causing the mass murder of almost 300 people

3. In order to cover the traces of a monstrous crime, from the end of July 2014 the Ukrainian SBU conducted special measures to destroy the facts of the special operation, and all materials that indicate the presence of combat aircraft having carried out combat missions on July 17, 2014.

We recommend you to read all four leaked documents with full English translations: Link to source.

Gravity of these leaked documents are huge, showing exactly something what was also seen and understood after the tragedy on the Donbass territory. Confirmation of the direct Ukrainian air force involvement in the bloody operation is a long waited trigger to redirect discussion back to the right track and toward most obvious target concerning most important question about responsibility of the mass murder: Kiev’s leadership and involvement of the Ukrainian air forces.

We need to remember, that discussion of involvement of the BUK anti-aircraft missile has just no real credibility left, and there is still not a single factual evidence in public, what could even point this mentioned weapon system to be responsible for the explosion in the sky that day. So even that we know, that Ukrainian BUK-batteries were fully operational and placed at the striking distance at the day when MH17 was shot down.

All materials which were published to lead public attention towards accusations and claims, that it was “Donbass militants and Russian responsibility”, provided mostly by the Ukrainian SBU right after the airplane crash, have been “debunked” already long time ago. In general, discussion about possible Russian involvement in the BUK-launch has been just a geopolitical blame game – empty accusations and claims without real evidence behind.

To this day the so-called “International Investigation Committee” of the plane crash, led by Netherland, hasn’t been able to provide needed answers concerning the tragedy: With what weapon MH17 was shot down, from where and by whom? Soon three years have gone, and they still don’t know basically nothing?

We haven’t heard the recordings and seen actual data from the MH17 “Black Boxes”, which were provided by the DPR People’s Militia to the investigators. We haven’t seen material from the most important Ukrainian radars, heard the communication of the air controllers – just northing. At the same time the USA, NATO and their allies have not provided any information or data concerning the event, even that we know for sure, that US-NATO satellite and other military intelligence systems were operational in the area at the moment of the tragedy.

What we know is, and also what Ukrainian SBU-document leak confirms is:

1. Ukrainian President Petro Poroshenko was personally heading the meeting of the Ukrainian Security Council. Meetings of this main administrational body took place twice on 17 July, 2014, before and right after the plane crash. If we seek main suspects and murderers for the act of state terrorism, they were all there and together

2. Russia almost immediately after the plane crash provided to the public factual intelligence materials, like radar data and satellite pictures, which also showed involvement of one or more Ukrainian military aircrafts near the flight MH17 at time of the explosion

3. Number of witnesses have told about military jet or several military jets around the MH17. These testimonies have been also on TV and people have spoken to media with their own faces and names from what they witness that tragic day

4. When you observe the open and flat terrain around the crash site, and see that great amount of people living there, you will understand, that tens of thousands of people saw and heard what happened high in the afternoon sky. But still, there is no reliable pictures or videos available, masses of people to witness actual launch of BUK-missile. As we know, that strike would be heard, seen and witnessed by thousands of people, and traces of the missile and its impact in the sky, would been visible for several minutes after the launch

5. When Russian missile manufacturer made its tests of BUK missile systems hitting passenger aircraft and publiced its investigation results, they only proved that what has been claimed and accused, just could not be truth, and with kind of BUK-system Ukraine and the West have accused that MH17 was shot down, absolutely could not happen. Russian investigation on the other hand didn’t say that some other kind of BUK missile was used to shot down MH17, leaving door wide open for involvement of air-to-air missiles

6. Ukraine shelled heavily and for a long time the crash site where MH17 was shot down (targetting pieces of the plane) and besides of that, Ukrainian officials have basically done everything they could to make proper investigation impossible on the MH17 crash site

7. Only motive what has been presented about “why Donbass defenders and Russia could have been involved in the shooting down of MH17” has been just because of mistake. Now, when you count how Ukraine, the West and its leaders have made military-political benefits from repeating how “Russia shot down the civilian airliner”, and which happened just at the moment of devastating Ukrainian military defeat in the Ilovaisk cauldron against DPR forces – the list of Ukrainian motives is almost endless… We should remember that President Petro Poroshenko warned just weeks before about his mysterious “Plan B” – if events in the Donbass battlefield will not follow the way the Kiev would like to see, causing “a nasty surpise” for Donbass defenders – like shooting down a passenger jet and then blame them?

8. We even know the name of the Ukrainian pilot, who should be keep as suspect and possibly directly responsible for launching an air-to-air missile against the civilian airliner, flight MH17, on 07/17/2014.

So, what else you need to be convinced, that real suspects and responsible persons for the mass murder of civilians in the sky of Donbass, should not be sought in Donetsk, Lugansk or Russia, but instead in Ukraine, Kiev, Washington and most possibly, NATO headquarters as well?