MSF judges the conquest of Raqqa: the US coalition “inflicted a flood of fire on the city”, “nobody cared about civilians.”

in ULTIMI POST
Reading Time: 1min read
A A
0 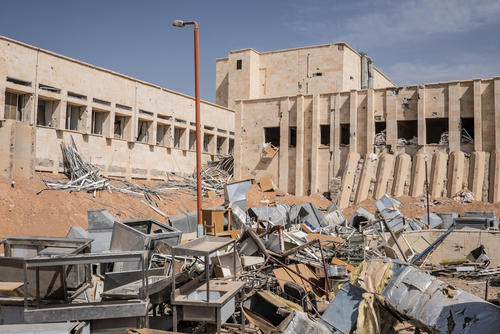 Here is how – on its official website – MSF describes the conquest of Raqqa from the US coalition. Think now about the different approach of the media and Western governments in the case of Est Ghouta in Damascus. Good war and bad war. The war of the good and the war of the bad … (Vietato Parlare)

After an offensive lasting four and a half months, the Syrian Democratic Forces (SDF) and an international coalition finally captured Raqqa, in northern Syria, from the so-called Islamic State (IS) group. The widespread devastation of the city not only attests to the intensity of the fighting and the airstrikes, but also raises questions as to the fate of the civilians who, from the start of the offensive, were trapped in the city with no access to humanitarian aid. Natalie Roberts, head of emergency operations at Médecins Sans Frontières (MSF), describes what happened to civilians during the offensive.

Did MSF teams manage to access people in Raqqa during the offensive?

MSF was no exception to any other humanitarian organisation. We were also unable to obtain access to Raqqa during the offensive. Throughout the hostilities, our teams found themselves virtually powerless to provide any assistance whatsoever to the people trapped in the city. Their work was limited to the hospitals in Kobane, Tal Abyad and Al-Hasakah – all near the border with Turkey – and displaced persons camps.

After Raqqa was re-captured from IS group in the middle of October, close to 1,300 people from the city made it to the camp in Ain Issa where MSF provides medical care. Most of them were women and children. The few men accompanying them were either elderly or had been wounded during the offensive and treated in hospitals controlled by Islamic State group in Raqqa.

The displaced people arrived under SDF escort but they told us they’d received no help in getting out of the city to one of the checkpoints set up around Raqqa. Almost half of them are now confined in an area separate from Ain Issa camp. The people we’ve been able to meet with talk about the intensity and the terror of the airstrikes, and how their living conditions progressively deteriorated. They described how many inhabitants who were forced to go out into the street to find water ended up wounded or dead.

If a light was switched on in a house at night, it became the target of mortar fire or airstrikes. They also told us there’d been more men with them when they escaped but they’d been taken away by the SDF, most likely to a detention centre. We don’t know whether any of them needed medical attention and if they’ve received treatment.

What do we know about the civilians who remained in Raqqa during the offensive?

When IS group took over in 2014 some of the city’s inhabitants decided to leave and go to Turkey, Europe or some place else.  Others chose to stay, or they stayed precisely because they had no choice. We know that those with no freedom to choose were often the poor, the elderly, or those with no family or friends to take them in. And then there were people who couldn’t or quite simply didn’t want to leave their homes. We also know people went to Raqqa because there was work to be found under IS group. Reasons behind a decision to go to, or stay put, in the city weren’t just about openly supporting IS group.

It’s impossible to know how many civilians were in the city during the offensive and how many of them were killed or wounded. During the battle for Raqqa, nobody cared about the civilians. In the name of a “just war” waged against IS group, the coalition—benefiting from unanimous support—inflicted a deluge of fire on the city. Its inhabitants found it extremely hard to flee, especially as they were held hostage by IS group and anyone attempting to escape became a target.

There were no ambulances, so the only way the wounded in Raqqa could be evacuated was in military armoured vehicles. Obtaining access to casualties was totally dependent on the goodwill of the soldiers. Despite the intensity of the coalition airstrikes, which culminated in the total destruction of the city, very few civilian casualties were evacuated from the battlefield. The very few hospitals in the region with an emergency room and operating theatre—and therefore the capacity to treat the war-wounded—were decidedly underwhelmed. Kobane hospital is the referral hospital for patients with injuries requiring orthopaedic treatment, but just three people were admitted during the whole month of September.

The coalition announced that 3,000 civilians were evacuated during the last week of the battle. But it’s impossible to verify this number, as is an SDF spokesperson’s claim that there were no civilians left in Raqqa at the time of the final assault. Ultimately, we’ll probably never know how many people were wounded or killed during the offensive.