June 1, 2017 (Joseph Thomas – NEO) – Recently, terrorist attacks have unfolded across Indonesia, a militant network disrupted along the Thai-Malaysian border and full-scale military operations including aerial bombing deployed as Philippine troops fought to take back Marawi City on the southern island of Mindanao, all linked or affiliated with the Islamic State. 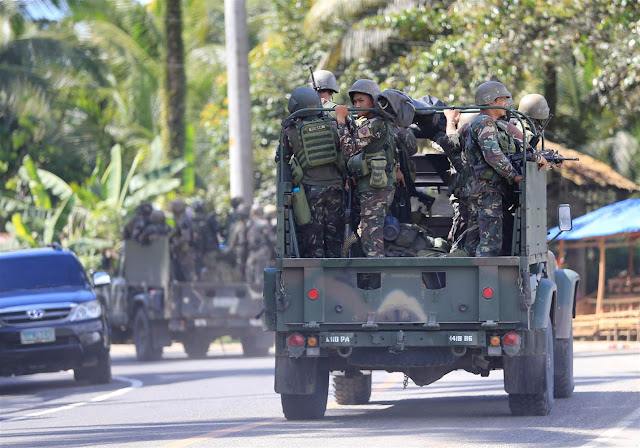 A dangerously deceptive narrative is being crafted by US and European media organisations, the same sort of narrative that was used to conceal the true source of the Islamic State’s fighting capacity across the Middle East and North Africa (MENA) region beginning as early as 2011.

The New York Times, for example, in an article titled, “In Indonesia and Philippines, Militants Find a Common Bond: ISIS,” claims:

An eruption of violence in the southern Philippines and suicide bombings in Indonesia this week highlight the growing threat posed by militant backers of the Islamic State in Southeast Asia.

While the timing of the Jakarta bombings and the fighting on the southern Philippine island of Mindanao appears to be coincidental, experts on terrorism have been warning for months that the Islamic State, also known as ISIS, has provided a new basis for cooperation among extremists in the region.

However, back in reality, the Islamic State is no different than any other military force. Its members require food, water and shelter daily. They require weapons and ammunition. They require uniforms. They need transportation, which in turn requires fuel, maintenance personnel and spare parts. And most important of all, the Islamic State requires a steady stream of recruits made possible only through organised education and indoctrination.

For the scale the Islamic State is doing this on, stretching across MENA and now reaching into Southeast Asia, confounding the response of not just individual nation-states but entire blocs of nations attempting to confront this growing threat, it is abundantly clear the Islamic State is not fulfilling these prerequisites on its own.

Its doing this all through state sponsorship, a reality rarely mentioned by the New York Times,  Agence France-Presse, Associated Press, CNN, the BBC and others. Those acquiring their worldview through these media organisations are setting themselves up and those depending on their analysis for tragic failure.

Education and Indoctrination: Who is Feeding the Fire?

The ranks of the Islamic State in Southeast Asia are being filled by a regional network of extremist indoctrination conducted in institutions posing as Islamic boarding schools known as madrasas. Those institutions indoctrinating local populations with notions of extremism and inspiring them to take up violence and terrorism share a common denominator; Saudi funding. 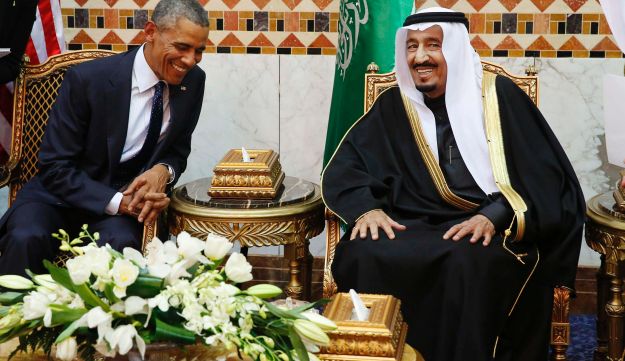 Visiting Senior Research Fellow at the Center for Technology and National Security Policy at the National Defense University, Yousaf Butt, in a Huffington Post article titled, “How Saudi Wahhabism Is the Fountainhead of Islamist Terrorism,” would put Saudi funding of such extremist networks into perspective, stating:

It would be troublesome but perhaps acceptable for the House of Saud to promote the intolerant and extremist Wahhabi creed just domestically. But, unfortunately, for decades the Saudis have also lavishly financed its propagation abroad. Exact numbers are not known, but it is thought that more than $100 billion have been spent on exporting fanatical Wahhabism to various much poorer Muslim nations worldwide over the past three decades. It might well be twice that number. By comparison, the Soviets spent about $7 billion spreading communism worldwide in the 70 years from 1921 and 1991.

The article also lays out the cause and effect between Saudi funding and the predictable terrorism, violence and instability that follows. Yousaf Butt concludes by aptly stating:

The House of Saud works against the best interests of the West and the Muslim world. Muslim communities worldwide certainly need to eradicate fanatical Wahhabism from their midst, but this will be difficult, if not impossible, to accomplish if the West continues its support of the House of Saud. The monarchy must be modernized and modified — or simply uprooted and replaced. The House of Saud needs a thorough house cleaning.

The United States under the administration of President Donald Trump just sealed a $110 billion arms deal with Saudi Arabia, following tens of billions of dollars of weapon deals under the previous administration of President Barack Obama, and in turn following a pattern of decades of military, political and economic support for the Persian Gulf state. Western support for the House of Saud appears to be fully intact and in no danger of changing any time soon. 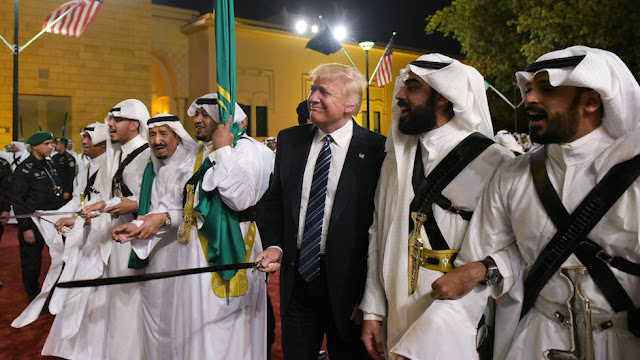 The direct connection between terrorism ranging from Al Qaeda to the Islamic State and Saudi-funded indoctrination is clear. Yet US and European media organisations attempt to muddle the issue with unwarranted ambiguity.

New York Times articles like, “Saudis and Extremism: ‘Both the Arsonists and the Firefighters’,” go as far as stating:

Over the next four decades, in non-Muslim-majority countries alone, Saudi Arabia would build 1,359 mosques, 210 Islamic centers, 202 colleges and 2,000 schools. Saudi money helped finance 16 American mosques; four in Canada; and others in London, Madrid, Brussels and Geneva, according to a report in an official Saudi weekly, Ain al-Yaqeen. The total spending, including supplying or training imams and teachers, was “many billions” of Saudi riyals (at a rate of about four to a dollar), the report said.

And continues by stating:

That is the disputed question, of course: how the world would be different without decades of Saudi-funded shaping of Islam. Though there is a widespread belief that Saudi influence has contributed to the growth of terrorism, it is rare to find a direct case of cause and effect. For example, in Brussels, the Grand Mosque was built with Saudi money and staffed with Saudi imams. In 2012, according to Saudi diplomatic cables released by WikiLeaks, one Saudi preacher was removed after Belgian complaints that he was a “true Salafi” who did not accept other schools of Islam. And Brussels’ immigrant neighborhoods, notably Molenbeek, have long been the home of storefront mosques teaching hard-line Salafi views.

After the terrorist attacks in Paris in November and in Brussels in March were tied to an Islamic State cell in Belgium, the Saudi history was the subject of several news media reports. Yet it was difficult to find any direct link between the bombers and the Saudi legacy in the Belgian capital.

Yet commonsense, when applied, takes into consideration the substantial intelligence networks and police states that exist across the European Union’s various members and the fact that in the aftermath of most recent terrorist attacks it is revealed that security services across Europe often had foreknowledge of suspects, their criminal backgrounds and activities as well as their ties to extremism both within their own communities in Europe and abroad upon battlefields in Syria, Iraq, Yemen and Libya.

It is well within the means of US and European intelligence and security agencies to establish a direct link between terrorism and Saudi funding. What is lacking is the political will to do so.

A Global Expeditionary Force That Goes Where Western Troops Cannot

It is clear that despite the New York Times attempting to make a connection between Saudi-funded indoctrination at mosques and madrasas and terrorism as ambiguous as possible, Saudi funding is the primary factor driving extremism and filling the ranks of terrorist organisations like Al Qaeda and the Islamic State.

Coupled with covert, indirect and direct military support when these extremists reach various battlefields around the world, Saudi-funded extremism represents what is essentially a mercenary expeditionary force, auxiliaries used in pursuit of modern day empire.

As witnessed in Libya and Syria, the purpose behind the United States and Europe supporting Saudi Arabia and turning an intentional blind-eye to its global network of extremist indoctrination and the terrorist organisations these networks feed into, is targeting and overthrowing governments the United States and Europe are incapable of overthrowing directly with military force.

Saudi-funded indoctrination filling the ranks of this virtual global mercenary force, can be used as a tool for regime change. Saudi-funded extremists were instrumental in overthrowing the Libyan government in 2011, and have led the fight to oust the Syrian government. 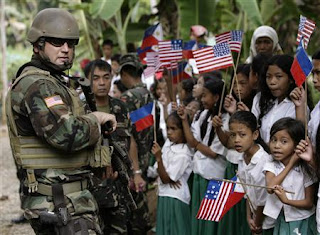 Saudi-funded indoctrination can also be a useful tool of geopolitical coercion, opening up opportunities for the US to sell a greater military presence in any given country targeted by Saudi-funded extremism.

In fact, the New York Times’ recent article, “In Indonesia and Philippines, Militants Find a Common Bond: ISIS,” hints as just such a motive in the Philippines, claiming:

Since the early 2000s, the United States has stationed military advisers in the southern Philippines to aid in the fight against Abu Sayyaf and other Islamic extremists.

Richard Javad Heydarian, a political science professor at De La Salle University in Manila, said that Mr. Duterte was under mounting pressure to address the crisis in his home island, Mindanao, and that he may need further assistance from Washington.

During a period when the Philippines finds itself pivoting away from the United States and toward Beijing and other regional allies, needing “further assistance from Washington” is a circumstance too convenient to be coincidental.

Considering how the US has used Saudi-funded extremism it has enabled elsewhere, there is need for concern not only in the Philippines, but across all of Asia regarding the Islamic State’s “sudden interest” in the region.

Asian Policymakers Only As Good As Their Sources

As obvious as the truth behind the Islamic State’s presence and perpetuation in Asia seems to be, many policymakers, politicians and people in the media across Asia appear to be mesmerised by US and European headlines and intentionally misleading analysis.

Eagerly republishing and repeating these headlines and analysis, policy and media circles find themselves mired in a deepening swamp of delusion. Within this swamp of delusion they are exposing Asia to the same threat the MENA region is now facing.

For a variety of reasons, extremism was allowed to take root and spread in nations like Libya and Syria, where political deals and cooperation with the US and Europe led toward greater violence and destabilisation, not toward resolving the issue of extremism, terrorism and national or regional security. 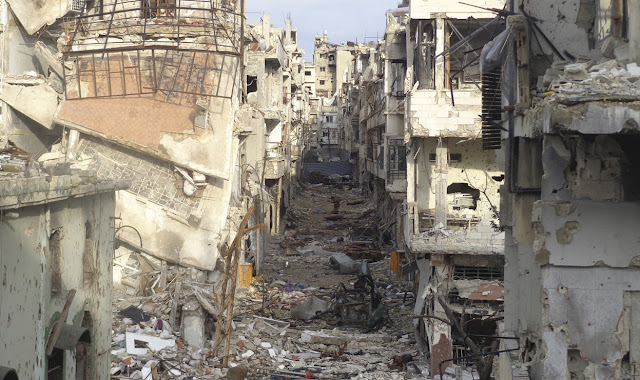 Likewise in Asia, should the root of extremism and terrorism not be addressed, namely Saudi-funding and America’s and Europe’s aiding and abetting of the House of Saud, this threat will continue to be cultivated and leveraged by its creators at the cost of its Asian hosts.

While it may not be politically popular to openly expose, condemn and otherwise confront US-Saudi sponsored terrorism in fear of being ostracised from US-European media and policy circles, Asian policymakers, politicians and media should consider the fate of their MENA counterparts and the state of Libya and Syria now versus pre-2011 when there was still a chance to head off a regional humanitarian catastrophe.

The inability of Asian policymakers to clearly single out and deal with Saudi-funded, US-backed terrorism in the region allows political demagogues to play entire ethnic and religious groups off against one another, further compounding factors that fuel instability and even war. Coupled with socioeconomic factors, foreign interests seeking vectors into Asia to coerce, control or even overthrow regional governments have a wide variety of options to pick from.

Eliminating these options and closing the door to outside interference means that the Asian public must be fully and properly informed, and all forms of foreign funding and support, whether it be “schools” or nongovernmental organisations, should be called into question. It is clear that part of this process should include national and regional calls and mechanisms to end Saudi funding to organisations posing as charities, educational institutions and other fronts propagating divisive extremism.

Considering the fate of the MENA region, Asia may have only one chance to get this right. Those policymakers who prove themselves incapable of objective, truthful analysis and who find themselves simply helping along foreign interference should no longer be deferred to as policymakers, and perhaps take up a more appropriate title; lobbyists.