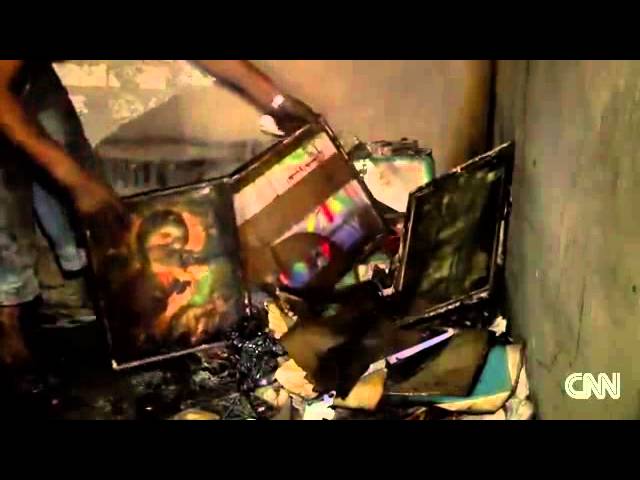 Kafr Hakim, Egypt (CNN) — For 67 years, the Virgin Mary Church has been a peaceful refuge for Shenouda El Sayeh, much like the Giza province village of Kafr Hakim where it rests and where he has lived all those years.

But, as he swept its floors on Thursday, it was painfully obvious things had changed.

The night before, a mob — chanting against Coptic Christians such as El Sayeh and calling for Egypt to become an “Islamic state” — had torched and looted the Virgin Mary Church.

He’s not alone. Christians all around Egypt are cleaning up in the aftermath of a spate of attacks, which came on the country’s deadliest day since the 2011 revolution that overthrew longtime President Hosni Mubarak.

Bishop Angaelos, the Cairo-born head of the Coptic Orthodox Church in the United Kingdom, said he was told by colleagues in Egypt that 52 churches were attacked in a 24-hour span that started Wednesday, as well as numerous Christians’ homes and businesses.

Ishak Ibrahim, a researcher with the Egyptian Initiative for Personal Rights, told CNN he had confirmed attacks on at least 30 churches so far, in addition to the targeting of church-related facilities, including schools and cultural centers.

And the new day brought new attacks. Prince Tadros Church in Fayoum, which is southwest of Cairo, was stormed and burned Thursday night, according to the official Middle East News Agency.

This and other attacks have been blamed by some on supporters of the Muslim Brotherhood, the Islamist movement which backs recently deposed President Mohamed Morsy. Government efforts to clear the group’s Cairo protest camps resulted in gruesome scenes in the capital: Egypt’s health ministry says that at least 580 people were killed and more than 4,000 injured amid clashes involving security forces and Morsy supporters.

Against this backdrop, it may be some time before it’s established what group, if any, is behind the church attacks, and how coordinated this violence has been.

Until then, Christians in Egypt are left to try to put things back together, as well as to attempt to make sense of what’s transpired.

As Dalia Ziada of the Ibn Khaldun Center for Development Studies, told CNN: “This is horrible to happen in only one day.”

‘A very dangerous game to play’

Egypt will have much to deal with if, and when, things do settle down. Once that happens, Angaelos says that a proper investigation of the church attacks should follow — especially since, he feels, the sheer scale of incidents suggests they were orchestrated, rather than a byproduct of chaotic unrest.

“We would want the people who have done it to be brought to justice because I think they are trying to do something which is much more dangerous,” he said.

The targeting of churches and Christian properties was not unexpected, Angaelos said, given the tensions in Cairo and elsewhere and in light of escalating attacks on Coptic Christians in recent weeks.

The growing threat led him last week to issue a statement warning of “a very real risk upon the life of every Christian.” Pope Tawadros II, the church’s leader in Egypt, also suspended weekly public events for fear of attacks on Christian congregations.

But the warnings didn’t prevent the violence, nor did security efforts to protect churches and Christian communities, according to Ibrahim.

Said Angaelos, “The ferocity and the speed with which it all happened … was quite surprising.”

A Bible Society of Egypt statement posted online Wednesday reported the “complete burning and destruction” of its bookshops in the cities of Assiut and Minia, in southern Egypt.

“Fortunately we were closed today, fearing such an attack, so none of our staff were injured,” wrote Ramez Atallah, the society’s general director. “The attackers demolished the metal doors protecting the bookshops, broke the store windows behind them and set the bookshops on fire.”