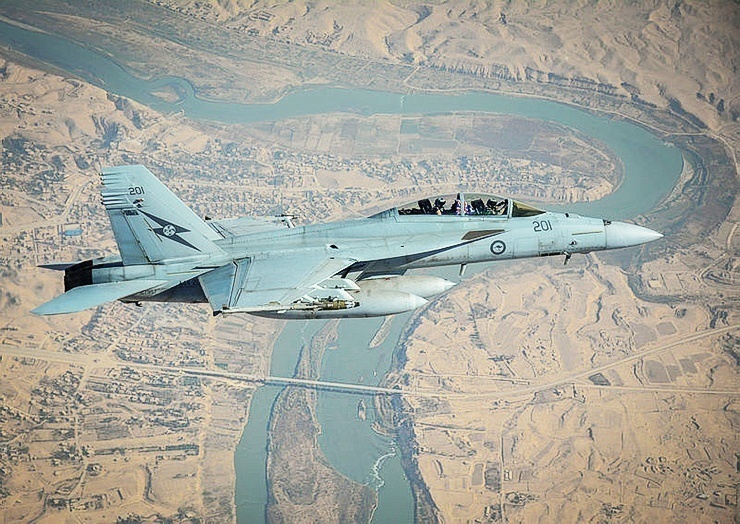 The decision by US President Donald Trump to withdraw US troops from Syria clearly caught Australian political, military and intelligence leaders by surprise. Despite claims of former Prime Minister Malcolm Turnbull that Australia and the US were “joined at the hip” the link is clearly metaphorical and does not extend to actual consultation.

Although there are officially no Australian troops in Syria and therefore none to be “withdrawn”, the Australian Air Force continues to provide air support via refueling aircraft, surveillance aircraft, and according to the Sydney Morning Herald (24 December 2018) fighter aircraft. These are for “coalition” air operations.

Those operations also include perpetrating war crimes, as in the air assault on Raqqa in 2017, which killed thousands of civilians, including women and children. Being ‘joined at the hip’ carries with it its own consequences, including accountability for the war crimes carried out by Australia’s allies.

The Australian political response to Trumps announcement has been muted. There have been the usual banal clichés about “continuing the mission,” “support for our allies,” and “continuing our training mission.”

Quite how any of these alleged roles is applicable in the Syrian context remains obscure. Just as obscure is the legal justification for Australia playing any role in Syria at all. The Australian government has at best obfuscated that legal justification. When the then Prime Minister Tony Abbott and Foreign Minister Julie Bishop announced in August 2015 that no decision to join the Syrian war would be made until they had legal advice, they omitted to tell the Australian public that they had received that legal advice more than a year earlier.

That advice, or even an executive summary indicating the legal basis for intervening in Syria, has never been released. If in fact the advice had said that Australia’s intervention would be in accordance with international law, then one might have thought the government would release the advice, even if redacted, to support its case.

Instead, Australians were told, via the Foreign Minister, that the intervention was pursuant to the collective self-defence provisions of Article 51 of the United Nations Charter, and the nation being “defended” in this case was Iraq.

Article 51 manifestly does not apply, and neither was that support sought by Iraq. Given the blatant illegality and lies used to justify the 2003 invasion of Iraq, which Australia enthusiastically joined, and the subsequent physical and political destruction of that country, Iraqis are likely the last people to be seeking Australian “help” about anything.

A better measure of the Iraq government’s attitude to be presence of Australian soldiers on its soil is found in the Iraqi government’s refusal to sign a Status of Forces agreement with Australia. As a consequence, all Australian military personnel in Iraq are there with diplomatic passports. It must be unique in modern military history that occupying forces, allegedly “training” the local troops has needed such protection from their erstwhile pupils.

Again, these basic facts are not discussed in the Australian mainstream media because to do so would open up too many awkward questions such as why occupying troops are still in the country they illegally invaded nearly 16 years after the event.

Trump’s announcement was greeted with dismay by the various sectors of the US military industrial complex for whom perpetual war is a major raison d’etre. Although Trump’s announcement is to be welcomed, it was accompanied by the absurd claim that the United States had defeated ISIS and therefore there was the longer any reason to stay.

It is presumably politically impossible for Trump, in the present hysterical American political climate, to acknowledge that it was Syria, aided by Russia, Iran and Hezbollah, who played by far the greater role in defeating ISIS. The reality is that the American presence has been a hindrance rather than help in defeating ISIS.

That hindrance was not by chance. The American goal, and that of their Saudi and Israeli allies, was the overthrow of the Assad government. That the Syrian government and its allies have thwarted this goal is a greater reason for Trump’s announced withdrawal than his claimed victory over ISIS.

The negative reaction to Trump’s announcement by the US political and military class starkly reveals the extent to which American foreign policy in the Middle East has been dictated by Israeli ambitions to (a) break up Syria and Iraq into smaller, more pliable statelets; and (b) hold onto parts already stolen, as in Palestine and the Syrian Golan Heights; and (c) give Israel unfettered access to the oil and gas riches in the Golan and off the Palestine coast.

One only has to look at the advisory board of Genie Energy, a major oil and gas player in the region on Israel’s behalf, to understand both the motives and the media support. That advisory board includes such people as former US vice-president Dick Cheney and media mogul Rupert Murdoch among other luminaries of the American deep state.

These considerations neatly dovetail with US policy to prevent the formation of a Shi’ite crescent stretching from Iran to the Mediterranean, via Iraq, Syria and Lebanon. That development is further complicated by Iran’s increasingly central role in China’s Belt and Road Initiative, the North South Transportation Corridor, and developing friendly ties with NATO member Turkey. The neocon ambition for ‘regime change’ in Iran looks less and less likely to succeed.

It is little wonder therefore that Australia’s leaders have been left floundering by Trump’s announcement. They have known from the outset that the whole Iraq venture was illegal and based on lies, as well as having other motives than those publically expressed.

It is almost certain that the legal advice the government obtained in 2014 about joining the Syrian war was to the effect that, absent a UN Security Council resolution or an invitation from the Syrian government, there was no basis in international law for such a venture.

They went ahead anyway. The reasons for doing so are equally opaque, not least because the government has never permitted a debate in parliament on its role in the Syrian war, and no government minister has been forthcoming beyond the usual vague generalisations about ‘combating terrorism.’ It is not difficult to infer the likely real reasons. One of those reasons is the delusional belief that the Americans will on some future occasion provide a defence umbrella under the invariably misquoted and misrepresented ANZUS Treaty.

Another factor would be Australia’s knowledge of Israel’s ambitions in the region. Judging by their support for Israel in countless UN General Assembly resolutions, that State’s continued disregard for international law is not a disqualifying factor. The recent decision to recognise West Jerusalem as Israel’s capital and a collateral decision to move Australia’s embassy to Jerusalem in the future only reinforces the hypocrisy of Australia’s commitment to international law.

Trump has now removed the fig leaf of Australia’s justification for being involved in the Syrian war. The political leadership literally do not know which way to turn. Hence the meaningless platitudes.

The leader of the Labor Party Bill Shorten, and likely next Prime Minister after the election scheduled for early 2019, spoke to the influential right wing think tank the Lowy Institute on 29 October 2018. On Labor’s future foreign policy he was almost as vague as the government, promising a “foreign policy with an Australian accent” whatever that may mean.

He reaffirmed Labor’s commitment to the ‘rule of law’ and the US alliance, without a hint of acknowledgement that those two principles are in fundamental conflict.

Trump’s decision should have been a golden opportunity to make a clean break with the disastrous foreign policy path that Australia has followed in the post World War 2 era. According to Michael Pembroke’s excellent account of the Korean War (2018) the Australian contingent in Korea were regularly appalled by American conduct such as the relentless bombing of civilian targets in the North; the use of biological warfare; the threats of nuclear weapons against North Korea and China; and the systematic ill treatment and murder of North Korean prisoners of war.

Rather than learn from that experience, Australia followed the United States into one imperial misadventure after another, including Vietnam, Afghanistan, Iraq, and Syria. That all of those ventures were characterized by lies, illegality under international law, widespread war crimes and the massive dislocation of civilian populations show a depressingly similar pattern.

One definition of insanity is to repeat the same process over and over again and expect a different result. The clear message from this government’s activities and Mr Shorten’s speech and the Labor Party conference that followed it is that under that definition Australia’s foreign policy is insane.

It seems only a matter of time before the United States makes its next major foreign policy blunder. Its provocative and belligerent activities in the South China Sea against China, and continuing support for the fascist regime in Ukraine leading to a confrontation with Russia, are the current leading candidates for the next wars. Based on history and the mindless anti-Chinese and anti-Russian rhetoric that characterizes Australia’s foreign policy ‘analysis’ it seems all too probable that Australia will once again follow faithfully in the American wake.

The costs of doing so are likely to be even more devastating than anything Australia has experienced in the past.