#SYRIA UNDER THE SIEGE: war, economic embargo and destruction of the Christian presence

May article but nothing changed in the background schemes and time passes in vain for some. I propose it again …

On 17/05/19 the European Union confirmed the sanctions against Syria. To take this measure, there was no need for any debate, either within the countries or among the countries themselves. The news was not in the newspapers and indeed few in Europe know of the existence of these sanctions, even a large number of parliamentarians ignore them.

The matter is handled discreetly by foreign ministers and is now resolved with a rapid exchange of mail. No clamor or even concrete initiatives to oppose it. There are issues (particularly foreign policy) about which defections between EU countries do not seem to be admitted with serious political and economic retaliation.

The reasons mentioned on the EU Council website are always those for years: to stir up “a genuine political transition” which then in English is the “regime-change” demanded by the USA. No mention of the terror unleashed by the Islamist militias, but only of a “violent repression against the population” that reverses the truth of the facts ascertained. Finally, a reminder of the “suffering of the Syrian people” transformed into a cynical weapon of war to achieve a political goal that is anything but hidden. It will be another terrible year in Syria … marked by the scarcity of everything and the lack of work, without the possibility of giving rise to a reconstruction, with no prospect of returning home for millions of refugees.

In other guises the war continues and now we try to bring down Syria by exhaustion, as in a siege. Here then (see  here ) this new emergency associated with the shortage of gas and oil (paradoxical for a country like Syria) which, in the first few months of 2019, has multiplied the victims even within refugee camps run by the UN for hypothermia and starvation (339 Syrian children died alone in the al-Hol camp until April, according to Asharq Al-Awsat). 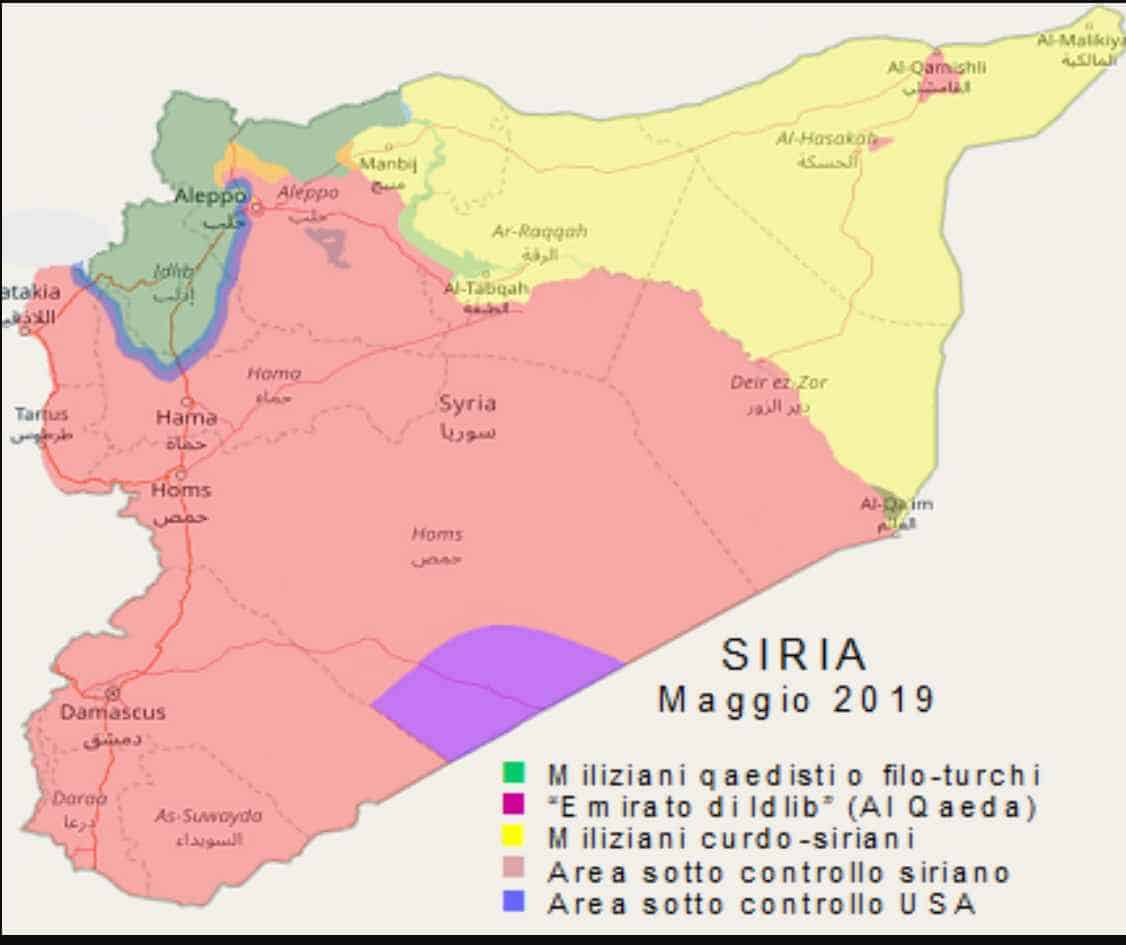 From Turkey to Idlib the “volunteers” still flow, recruited also among the Turkic populations of Central Asia and China. Money, ammunition and weapons also arrive (passed off as “humanitarian aid” for civilians) and Defense Analysis reported, on 20/05/19, the recent delivery of a game of anti-tank missiles including the powerful TOWs in use with many NATO armies. With the arrival of Spring, the Syrian regular army (SAA) has resumed operations against the powerful alliance of Qaedist and pro-Turkish militias that control Idlib province and the Turkish-Syrian border.

The stronghold of Al Qa’da is therefore well equipped and not only from a military point of view: it also enjoys the protection of the US and the European Union, which at the same time implement a harsh policy of sanctions against the government of Damascus that the terrorists there fights. In practice: a choice of field.

Therefore, even the Western press raises every false accusation against Damascus, but hides that Ankara holds back 3 million Syrian refugees on Turkish soil and that an impassable wall (built with the money of European taxpayers) makes it impossible to return home: a formidable blackmail weapon in Erdogan’s hands. 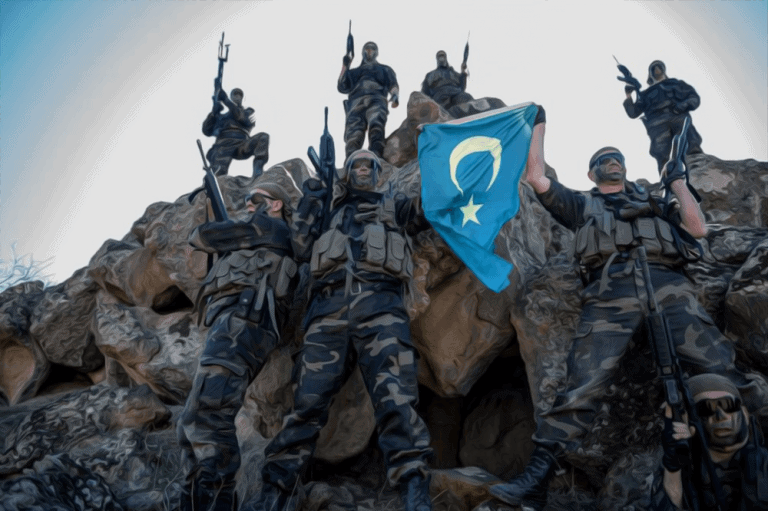 From China to Syria, pro-Turkish Uighur militia with Western weapons

In the Syrian drama there is also the particular drama of Christian communities, struck from the beginning of the conflict with unusual and barbaric violence. A cruelty also ostentatious (for example, in the videos of ISIS and on the glossy covers of “Amaq”, the magazine of Daesh …) that probably had a specific political purpose.

The Christians of Syria (about 10-12% of the population before the war) represent the affluent middle class, the dialoguing and cultured part, the element of cohesion of the nation … strike them therefore, and terrorize them to the point of causing them to flee, has had the meaning of an attempt to compromise the hopes of survival of the entire country.

For Fulvio Scaglione (“That lesson to the whole world of the Christians of Syria”, 16/05/19) the exodus of Christians, which not by chance was encouraged by the West, deprived Syria of a part of its  class more qualified manager and bourgeoisie  of professions and professions. We wanted to compromise or hope to be able to rebuild Syria (after the war) as a modern country. The success of the “rebels” would mean not freedom and democracy, but a sinking of the country into backwardness and fundamentalism.

That is why Christian religious remained heroically in their place, urging the faithful not to leave the country. Little known is the tireless work of the local churches that have fought to return the young to their homeland, even by purchasing airline tickets, also by recovering apartments for the homeless and paying part or all of the rents, even inventing new activities and offering job opportunities … 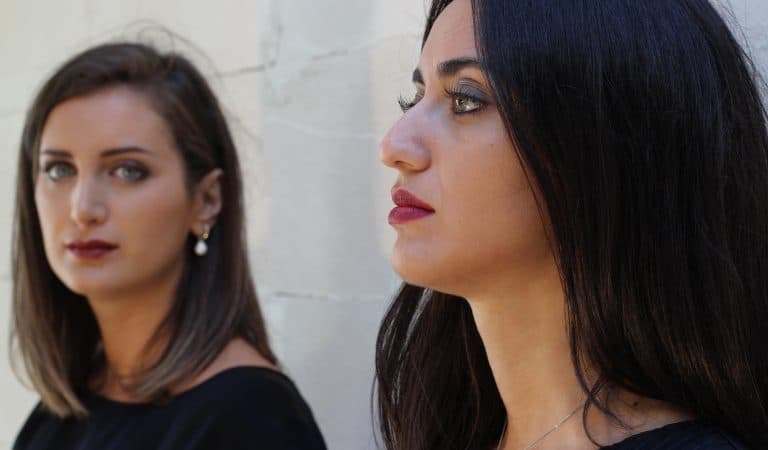 Faia and Rihan Younan, in the popular video “To Our Countries”

The Christian minority therefore represents, since the independence of Syria from France, the core and the element of stability in an otherwise ephemeral post-colonial political construction. It is thanks to this presence that Syria has managed to express a definite national identity.

“Arab nationalism” was evidently a counter-balancing formula for possible centrifugal forces and it must be recognized that this formula worked: Syria (unlike Libya) did not collapse in a few weeks and many observers reported the marked patriotic feeling of the majority of the population.

In this war, therefore, the state sought to protect Christians and their symbols. We recall: the visits of the presidential couple to the Christian communities affected by terrorism; the reconquest of the Christian town of Malooula, even before the Russian intervention, and the restoration of a large statue of the Virgin Mary on the top of the mountain above it (something that is more unique than rare in the whole Middle East); the consecration of Aleppo to Our Lady of Fatima during the long siege of this city.

Finally, it is interesting to note that the sisters Rihan and Faia Younan (the latter by now an established singer) are Christian, who, with the music video “To Our Countries” (which had an enormous echo throughout the Middle East) wrote the ‘intense and moving hymn that from 2014 inspires the strength of their country.

Stefano Aviani Barbacci. “The Vicar Apostolic of Aleppo: Syria dies due to the embargo imposed by the US and the European Union”. The City, 04/29/19

Packed with fine words but poor in truth, the document of the Council of the European Union on the renewal of sanctions against Syria does not mask the political intent of the embargo.

Rihan and Faia Younan. “To Our Countries” (video in Arabic and with English subtitles).