"If the West, in particular the United States of America, would help us, as Russia does, everything would be different"

It is not a question of being pro-Russian or not, that would not make sense. Indeed, those who judge in this way do not do a good service to anyone and above all to the truth, not changing much compared to the current violent drift.

In order for something positive to be built – even if it involves only one’s own person – everything must be judged free from ideological or partisan constraints.

We must judge from the facts, taking into account that evil exists and we can all do it. Otherwise everything is cluttered . Therefore, what we must look at is what moves and the responsibility for certain absences or certain decisions,   of which the manipulations are complementary:  this unequivocally describes who we are facing.

Now, in Syria, with regard to historical heritage, on the one hand there is not even the perception of what the loss of historical memory means . The great strategists who observe geopolitics on the globe evidently do not understand that without meaning, nor beauty, only the terrain of the era of barbarism is built.

Obviously, human rights – which today are almost always only the motive for the worsening of conditions – without a deep awareness of reality, are nothing. they are only the pretext for new authoritarianisms and new dictatorships.

In the end, we communicate what we are: we see it from the way we intervene in other states, from respect for the sovereignty of states and peoples.

If we look at Syria and observe how each party has moved for this country, we can easily distinguish how the various forces in the field have moved . The various actions speak volumes about the priorities that the US or Russia has put at the top of their to-do list.

I note that the statements on the US side have only been used to impose sanctions and to multiply violence, chaos and misery.

Naturally, a great responsibility has the person who would be responsible for telling us the facts as they are; but not only does it not do so but it distorts them: this is worthy of ignominy and describes that the freedom so much praised and sought after in the house of others does not exist in one’s own house.

This is no small matter: ‘thanks’ to these people most of you know nothing about Palmyra. Yet, the events that concern her describe the whole Syrian affair and our contradictions.

I am sure that not many of you will know of the fact that on the Palmyra amphitheater the Syrian soldiers defending the city were all killed with a blow to the head : it was done at the hands of the teenagers of the ISIS militants (here service ) who entered in the city. At the same time, many citizens and government officials were beheaded.

Similarly, few will know that just in the same amphitheater of the massacre, just after the recovery of Palmyra by the Syrian and Russian army, Russia sent the state orchestra from Moscow to give a classical music show , so that reaffirm the victory of meaning and of life that prevails over evil.

And finally, few of you know that the Syrian head of the Palmyra archaeological site was killed (during the first ISIS takeover of Palmyra in 2015): The terrorists publicly beheaded Khaled al-Asaad, 82, for refusing. to reveal the location of precious artifacts and thus save them from vandalism and resale (and then exhibited his body tied upside down in public).

Of these episodes and these men that few will remember, the pages never written in the history of the Syrian conflict are full.

In all these events, the US has always mocked Russia, accusing it of everything, even the spectacle for residents you see in the following video. But this is the soul of Russia. US leaders cannot conceive that Russia is really like that and that there is really nothing ‘behind’ the spectacle given to Palmyra in the ruins, for Beauty and for Syrians. It truly saddens me to note that a country that has as many resources as the United States has done nothing to preserve Syria’s cultural and archaeological heritage.

But not only that: the United States – when the ISIS gangs headed towards Palmyra to massacre civilians, the military who guarded it in defense and destruction of the Roman works throughout the site – stood and watched . Indeed, it was they who paved the way for ISIS, freeing them to leave Raqqa and spread again into the territories from which – with great difficulty and at the cost of many lives – they had been driven back.

At the beginning of June 2017, the ISIS terrorists, after making an agreement with the command of the Kurdish armed groups belonging to the Union of Democratic Forces (supported and under the orders of the USA), left the settlements of Et-Tadya, Al-Hammam, 19 kilometers southwest of Raqqa, without resistance, and moved in the direction of Palmyra.

And still this is not enough, even today the United States continues to arm and reconstitute the militias for which they claim to have to stay in Syria.

In this context, what other judgment can I express but a critical judgment on these facts that I have previously abundantly followed and described?

So to report the following testimony for me is not ‘routine’ but to give voice to a positive that alone judges.

Saving Culture: How the well-coordinated work of engineers, military and scientists helps in the reconstruction of Syria

Specialists in cultural heritage conservation appreciated the role of the Ministry of Defense of the Russian Federation in the restoration and conservation of cultural monuments in Syria.

The continuous US airstrikes on Syrian territory and the Americans’ reproaches for Russian aid to the Syrian people do not even think to subside. But despite the disinformation campaign launched against Russia, local Syrian residents, and especially specialists in the field of preserving the country’s cultural heritage, are grateful to Russia.

The head of the Department of Antiquities and Conservation of Monuments, Dr Maam Saad, said in the “Military Acceptance” program that it was thanks to the help of the Russian Federation that it was possible to work on the conservation of cultural monuments and has reprimanded the United States for inaction. 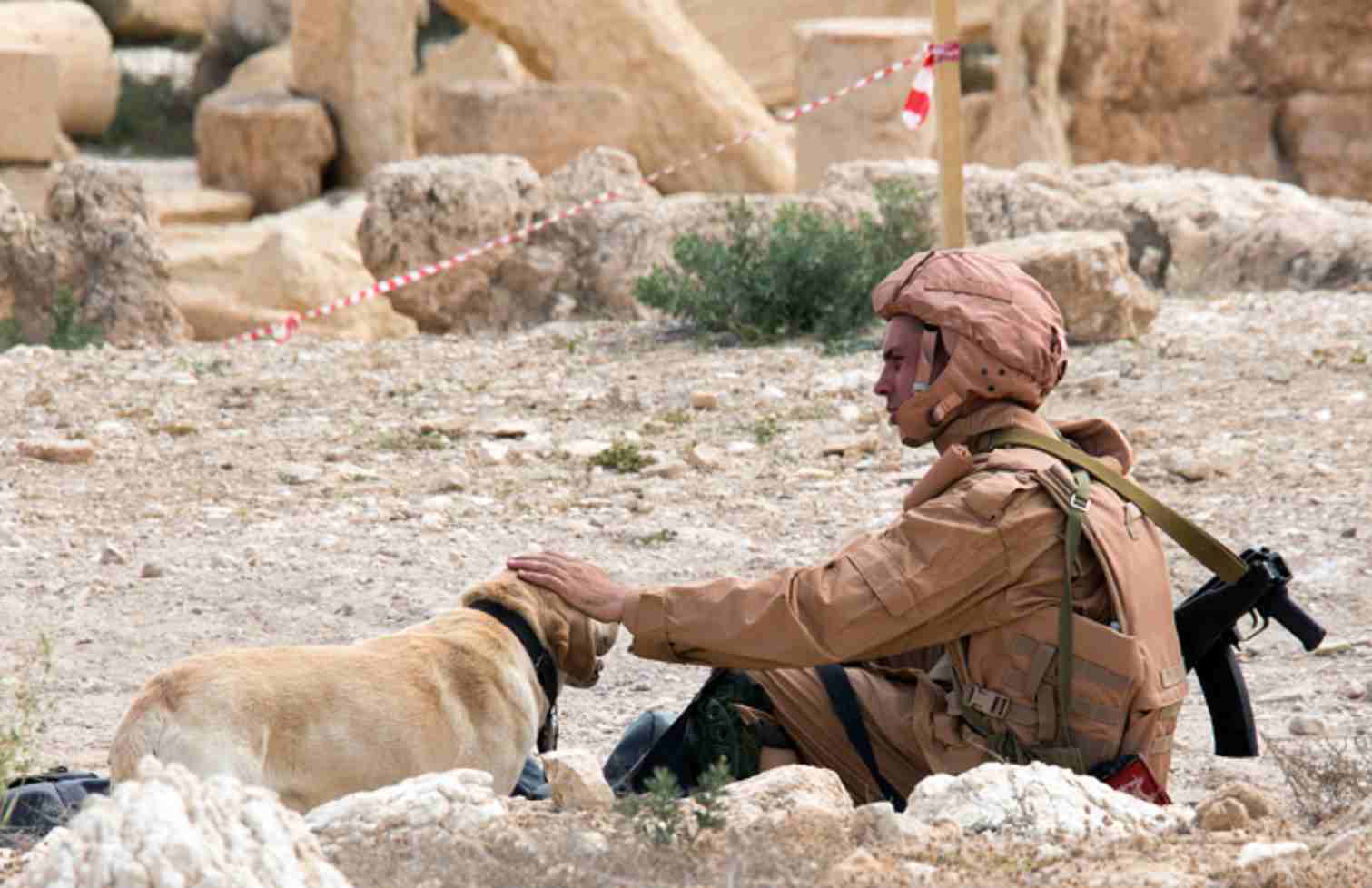 “If the West, in particular the United States of America, helped us, as Russia does, everything would be different,” said the specialist.

The black list of cultural losses at the hands of the militants includes: the Arc de Triomphe, the column of Zenobia, the Baalshamin temple, whose age was over 1800 years, the Bela temple, the funerary towers. Dr Maam Saad said the employees of their department, despite being civilians, have done their best to save their country’s cultural heritage, some having this effort paid for with their lives.

“A bullet, which was fired by the militants, fell near an employee who was fatally wounded by shrapnel,” said the head of the department.

The difficulties for Syrian and Russian scientists did not end there, during the retreat from Palmyra in the spring of 2016, the militants undermined the monuments – which are heritage of world history – and all the adjacent territory. According to Natalya Solovieva, Deputy Director of the Institute of the History of Material Culture of the Russian Academy of Sciences, Russian sappers faced a very difficult task, because in order not to damage the country’s cultural heritage, they had to transport the found bullets and mines manually to detonate them at a safe distance from the territory of the monuments.

“When I start talking about it, I always think it was a feat. Mine clearance began in the summer, when the heat was below 50 degrees. The military wore uniforms weighing about 40 kilograms, the dogs were with them and at the same time received the order of the Minister of Defense not to detonate a single bullet on the territory of the monument. And they took it all out, even if it was an aerial bomb. In fact, they didn’t detonate a single bullet near the sites, “the project leader Palmira said.

But this is not all the assistance that the Ministry of Defense of the Russian Federation has provided, scientists, together with engineers and under the cover of military personnel, compiled detailed 3D catalogs of objects destroyed at the hands of terrorists. In the future, such catalogs will facilitate the restoration of Syrian cultural heritage

article reported to me by Olga Bajramian