What happened to the democratic rights of the Hondurans who voted in the presidential elections on November 26th? The country is now in the hands of the armed forces. Human rights groups on the ground speak of murders, disappearances and many wounded as a result of the brutal repression at the hands of the police and the military.

The first results published by the Electoral Court on Monday, November 27, gave a clear lead to opposition candidate Salvador Nasralla. Then a second count radically inverted this tendency, putting incumbent Juan Orlando Hernández as the victor. With protests of fraud, the court decided to suspend the final publication of the results. Both candidates called on their supporters to defend victory on the streets. 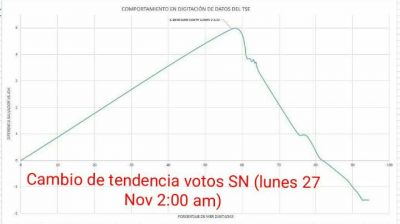 Voting tendency change: the plot shows Nasralla’s lead as the votes were being tallied

But in the following days, Nasralla denounced that opposition protests were being infiltrated by outside elements, thus creating an image of a country in chaos. It was the perfect excuse for minister Jorge Ramón Hernández, who took no time in announcing the suspension of constitutional rights on Friday night, for a period of 10 days. However, as constitutional law experts have stressed, this decree could only be approved by the President in a cabinet meeting.

The curfew specifically forbids people from going out on the streets between 6PM and 6AM. Soon after the images of the first dead people started circulating on social media. But that is not enough for some people to lose sleep…

The long road towards democracy

As soon as the Electoral Court announced the vote swing favouring Juan Orlando Hernández, Nasralla announced that the elections were “being stolen” and that this time he would not allow it, referring to the 2013 elections in which he also ran, garnering 13% of the vote. Nasralla was then the candidate for the Anti-Corruption party that he had co-founded.

In September 2014, the director of the Honduran Institute for Social Security was seized by the police for a theft estimated at 335 million dollars. The government of Juan Orlando Hernández declared that fighting corruption was to become a priority and signed agreements with several international organisations dedicated to transparency.

Meanwhile, the period after the 2009 coup has been extremely hard on Hondurans, who have valiantly resisted against the repression and the impunity of state agents. In 2015, the Honduran people marched every week with torches to protest against the dictatorship they faced, but the state carried on assassinating social leaders. The Honduran people have been subjected by the system to extreme violence, but there seem to be no alternative sight, as an opposition movement had yet to be unified. 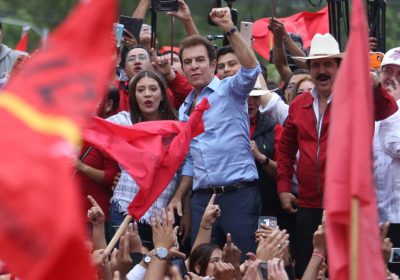 Nasralla next to Manuel Zelaya, who was ousted after a coup in 2009

In early July 2017, after months of waiting and only a day before the deadline, the Electoral Court registered the candidacy from the Opposition Alliance Against the Dictatorship. This coalition, coordinated by the ousted former president Manuel Zelaya, rallies multiple political forces around a social and democratic program: transparency and rooting out corruption; an alternative economic system with restructured productive sectors; investment in public services such as education, healthcare and housing; environmental protection, etc.

In the elections inside the Anticorruption Party earlier this year, the party did not choose its co-founder Salvador Nasralla as general secretary. Then Nasralla became the candidate for the Opposition Alliance due to his popularity as a former sports journalist.

Are democracy and impunity compatible?

It is important to take into account the difficulty in mobilising voters in a country immersed in extreme, structural violence. Honduras is one of the most dangerous countries in the world. Its murder rate is only comparable to the situation of countries during wars, such as Iraq! In the run-up to the elections there has been an escalation of violence. In the weeks leading to the November 26 poll, activists from both Opposition Alliance and the governing party were attacked.

The murder of activist Berta Cáceres in March 2015 became engraved in the minds of an entire generation. Since then, banners, murals and posters have multiplied to commemorate the courage she showed in her struggle against all odds. The slogan “Berta lives, she has multiplied” has spread beyond the borders of this small country. Berta had become renowned around the world for her role in the struggles of her organisation, COPINH. Her case is far from unique: for years, environmental activists have been harassed and attacked with impunity.

In this context, the daughters of Cáceres, Laura and Bertha Zúñiga, quickly moved to the spotlight and denounced the responsibility of Juan Orlando Hernández’s government: “the oligarchic groups have great influence, they mobilize the army to repress people. We should point out that since the 2009 coup many military people have become shareholders in extractive industry projects (hydroelectric, mining, and others). But the corrupt mafias also allow for the organization of criminal groups that work in coordination with major corporations…

In early November, an independent report rattled a lot of cages. Finally the complicity of the state in Berta Cáceres’ assassination was confirmed, in line with the strong suspicions held by relatives and friends from the very beginning. The report’s authors are adamant:

Among the chat exchanges between DESA staff members, the experts could detect that there was permanent contact between the company and state security forces, such as the Seguridad y Policía Preventiva. For example, only 14 hours after Berta’s murder, there were messages between DESA managers and staff members revealing that they had asked public officials for help in being shielded from any investigation.

Consequently Juan Orlando Hernández had every interest in hiding the incestuous links between the state and multinational corporations. It is no coincidence that during his term the security budget was increased and special military forces were created. The $17.3 million provided in security aid by the United States seem to pose no problem to our democracies.

But the plot thickens: the president of the Constitutional Court, David Matamoros, is a relative of Dennis Matamoros Batson, a legal counsel of a company that provides services for DESA, the company accused of playing a role in the assassination of Berta Cáceres.

One of the things at stake in the current Honduran elections is to get rid, once and for all, of this culture of political impunity.

Venezuela, an ever present scarecrow in elections all over the world

The media campaign for the Honduran elections was another opportunity to attack Venezuela. The Spanish CNN channel posed the crucial question of our time to Nasralla: “What is your position concerning Venezuela?”. And he responded “the Venezuelan problems should be solved by Venezuelans, just like Honduran problems should be solved by Hondurans” … and adding that should Venezuela sell oil at low prices Honduras would not complain…

To prove Venezuelan interference in the electoral process, secretary of the right-wing National Party Juan Diego Zelaya showed in the same program a photo of Manuel Zelaya, now coordinator of the Opposition Alliance, in a car next to Nicolás Maduro. But he did not mention the context of said photo, which is almost 10 years old! After the coup against Zelaya in 2009, Maduro was one of the few Latin American foreign ministers who committed personally to taking Zelaya to the Honduran border and risking his life to defend democracy in Honduras. But this is about taking advantage of the media propaganda of him being a dictator to demonise the Opposition Alliance… 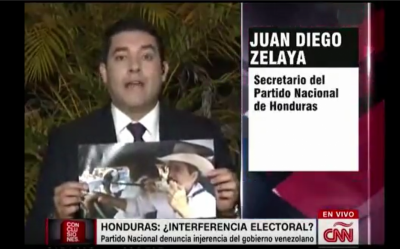 The National Party tried to use Venezuela as a scarecrow

For the dominant ideology, raising the Venezuelan scarecrow is a tactic to draw attention away from the shortcomings of governments that embrace economic policies that hinge on the almighty “free market”. Cultivating amnesia and distorting the historical examples of social achievements that challenge powerful elites is a tried and tested propaganda technique, which in this case has the virtue of ignoring the needs of the Honduran population! The most surreal moment happened when the government of Juan Orlando Hernández expelled the Venezuelan band Los Guaragaos, who were going to play at an opposition rally. Has Latin American folk music become a weapon of mass destruction against elites in power?1

The lesson of the Honduran people

The Opposition Alliance had demanded total transparency in the special tallying process announced by the Electoral Court, and sent a letter detailing 11 necessary conditions for them to accept the result. But the Court did not respect these conditions, and the Alliance has called on people to defy the curfew and defend the victory stolen via electoral fraud. Nasralla has pointed the finger at president Juan Orlando Hernández and Electoral Court president David Matamoros as the ones responsible for the situation.

It is true that elections are just a single moment in people’s lives. But in Central America, where institutions have done nothing to defend quality public services, representatives have destroyed whatever was left by raiding social security funds, there are crucial matters at stake. People would have plenty of reasons to adhere to fatalist ideas of “all politicians are the same”. If we add to this the trivialisation of violence and judicial impunity, we would believe that nothing could be done. But this is a vision that underestimates people.

History has shown, in contrast, that resistance is necessary and inevitable. The day after the 2009 coup, in spite of their suffering, the Honduran people did not sit idly by. First it created a Resistance Front against the coup government. Then it focused efforts in the struggle against corruption and continuity, especially since Juan Orlando Hernández bypassed the law to run for re-election, something that is illegal under the current Constitution. Finally, it is equally important to emphasise that these movements have understood that struggles, in order to be effective, also should bring about a change of government, even if that is not the final goal. As such, they have formed an Opposition Alliance to take on the current political opponent, and not shying away from openly describing the government of Juan Orlando Hernández as a dictatorship. 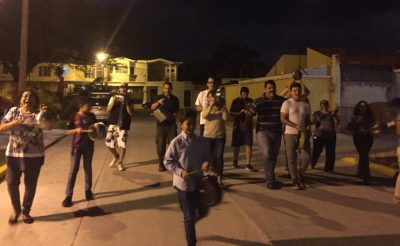 Hondurans protesting against fraud and the imposed curfew

From Saturday, December 3rd, to Sunday, Hondurans again protested against electoral fraud, the curfew and repression by banging pots and pans. In this context, the announcement of new results by an Electoral Court which is suspected of colluding with the government offers no prospects of exiting this deep political and institutional crisis. Only adhering to the conditions demanded by the main opposition party and putting a stop to repression will do.

In light of the challenges posed by Honduran events, the reactions from international bodies such as the OAS (whose president Almagro is obsessed exclusively with Venezuela) and the media have been timid or non-existent. This shows that the big powers are more than comfortable with failed states so long as they help advance their geopolitical interests.

The Honduran people are providing a brave lesson of hope for the oppressed peoples of the world. Let us join them in their struggle.

Uzbekistan: A Voice from Eurasia