in Disinformazione
Reading Time: 13min read
A A
0 The following post on Abdel Hameed al-Yusef, who was portrayed as an innocent grieving father of ‘deceased’ twins across the entire global mainstream media in the wake of the White Helmets reported April 4, 2017 chemical related event in Idlib, Syria, reveals the ‘victim’ to be an anti-Syrian government enemy combatant working in collusion with al-Nusra Front terrorist group. The evidence proving such is ascertained via a large number of screen-captured images taken from his own Facebook social media account along with the accounts of his brother and close associates.

This post will  NOT so much focus on what happened at the April 4th Idlib chemical event, so much as it will examine the postings, associates and actions of Abdel Hamid Yusef, the media’s chosen “main character” of the rather cloudy event.  At the conclusion to this post, theories and additional linked evidence will be offered in regards to what happened in Idlib on April 4th, 2017. Now lets take a look at the Facebook images.

The following images come from the Facebook page of Abdel Hamid al-Yusef, the aforementioned bereaved father promoted by mainstream media outlets. The link to his account is provided at the conclusion of this post. This is Abdel Hamid Yusef………. 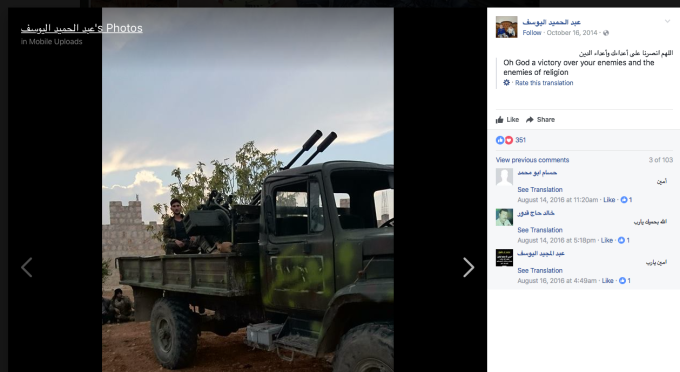 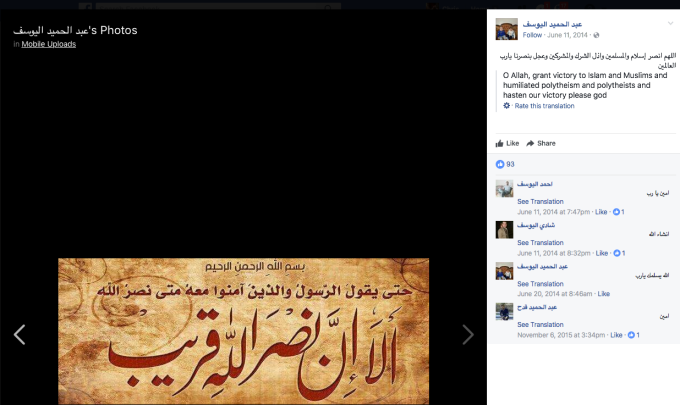 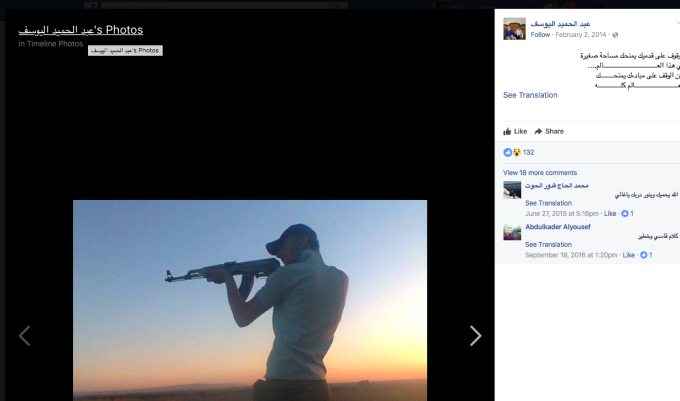 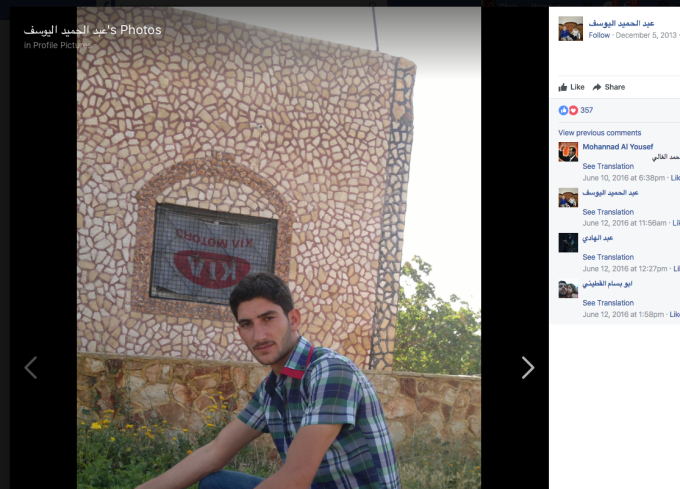 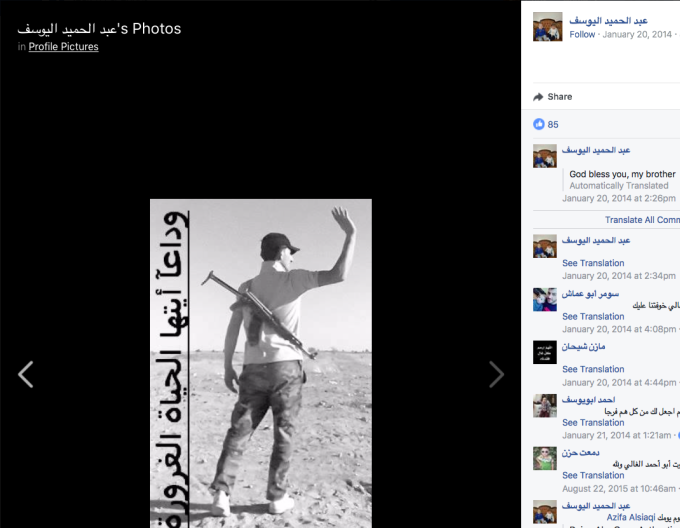 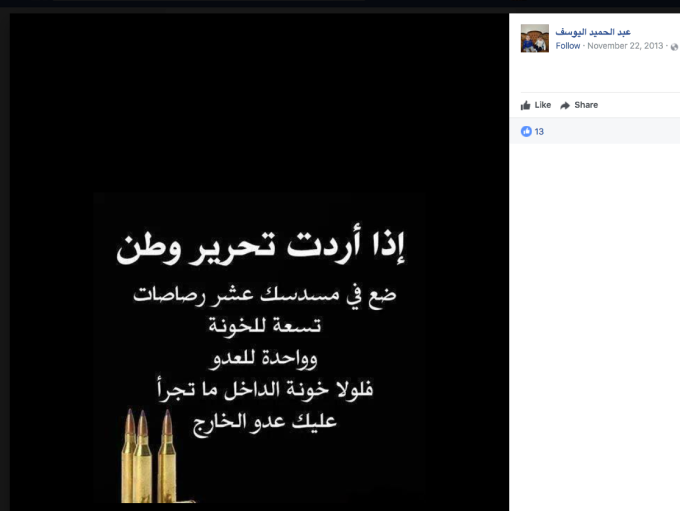 Images of his terrorist accomplices gathered from the same account…… 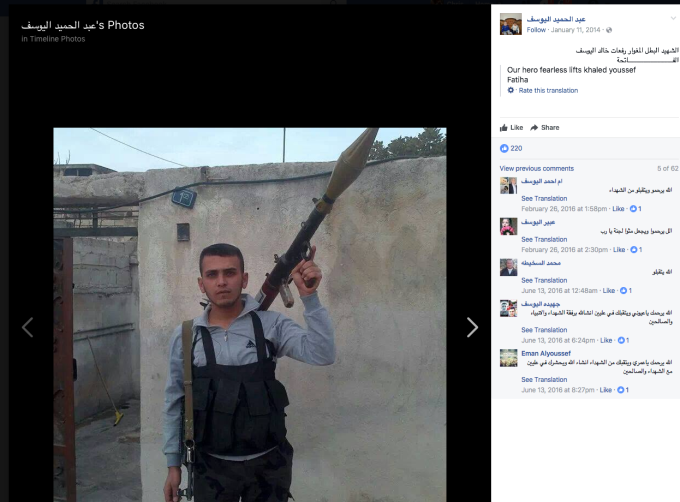 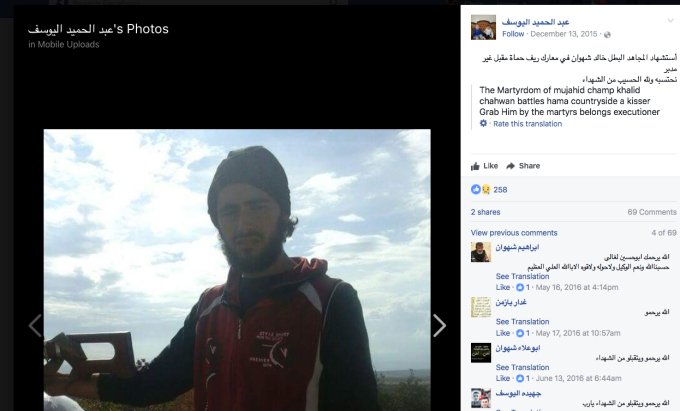 The following images are ascertained from the Facebook account of Mohammad al-Yusef,  the brother of Abdel Hamid al-Yusef. (He is supposedly now deceased due to the April 4th chemical event according to the list above), 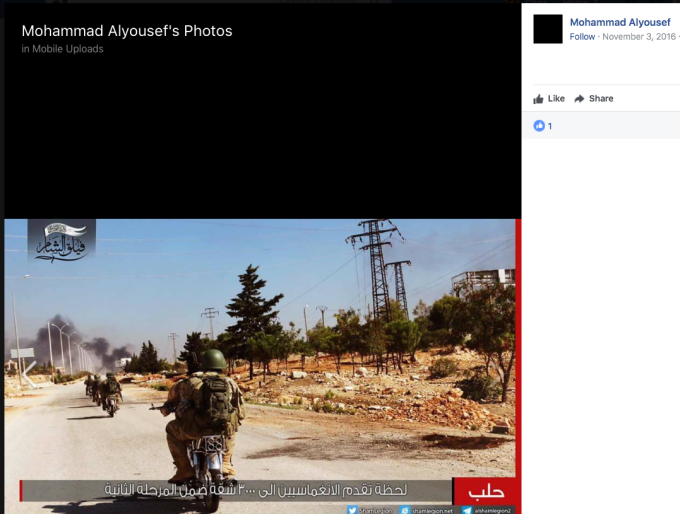 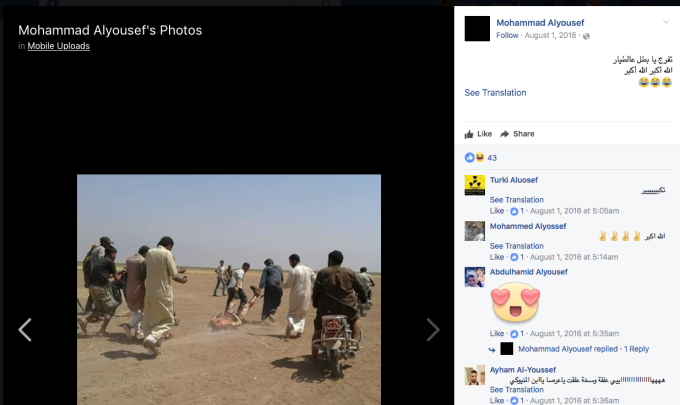 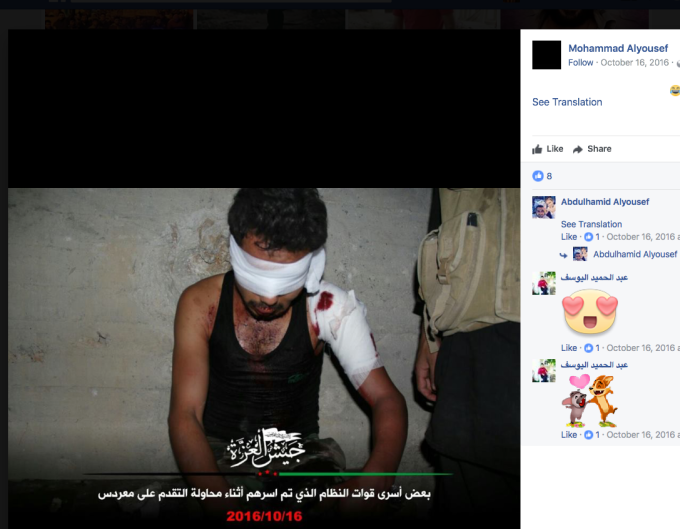 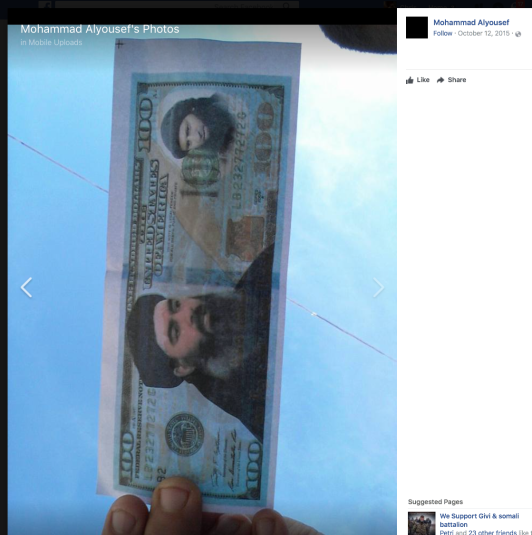 Strangely, the following image of his crying brother was uploaded to his Facebook account on April 5th, 2017, one day after Mohammed supposedly died.

This image of an infant from the April 4th White Helmets chemical event was uploaded to his account on April 6th, two days after Mohammed supposedly died.

His Facebook page also has pics of Hadi Abadallah who is the most well-known lead propaganda disseminator for al-Nusra Front terrorists and other jihadist groups in Syria. 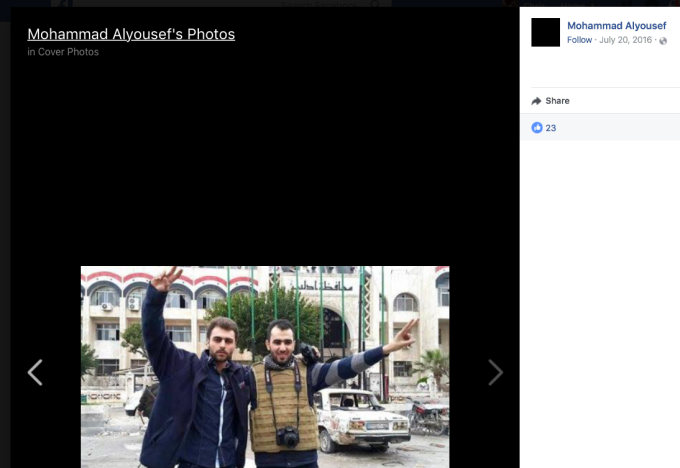 The following Facebook account belongs to Alaa al-Yusef who acts as a liaison for Abdel Hamid al-Yusef, and who has provided an introduction and timely convenient photo opportunities with Turkish President Recyep Erdogan on April 7th, 2017, as well as providing the material for the Associated Press to use in their stories (as shown below). 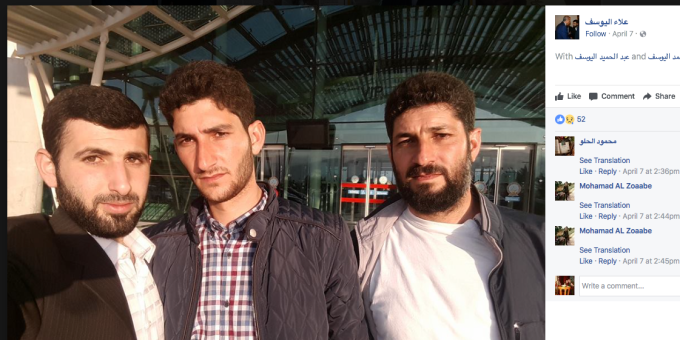 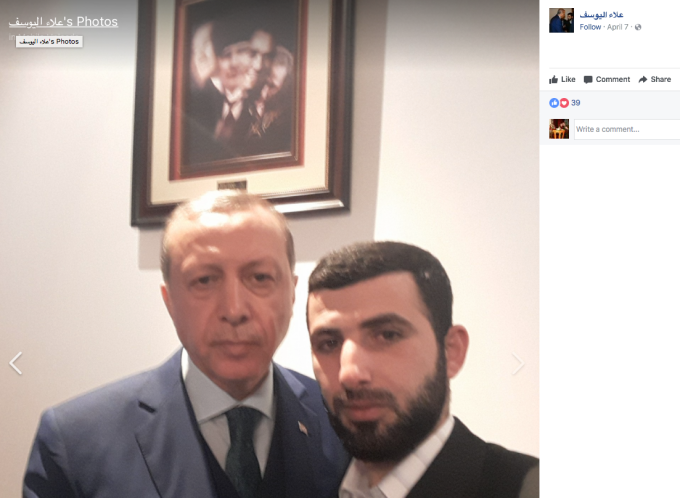 This additional Abdel Hamid al-Yusef group account captures more images of the propaganda opportunities…….. I have juxtaposed these images alongside western mainstream media produced content to provide examples of the global propaganda machine in action promoting these individuals. 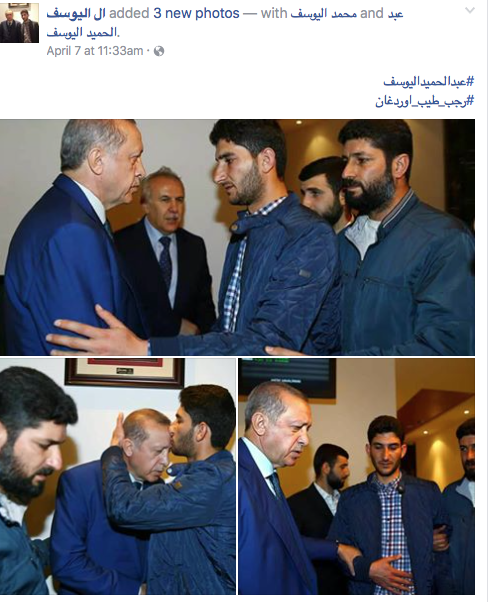 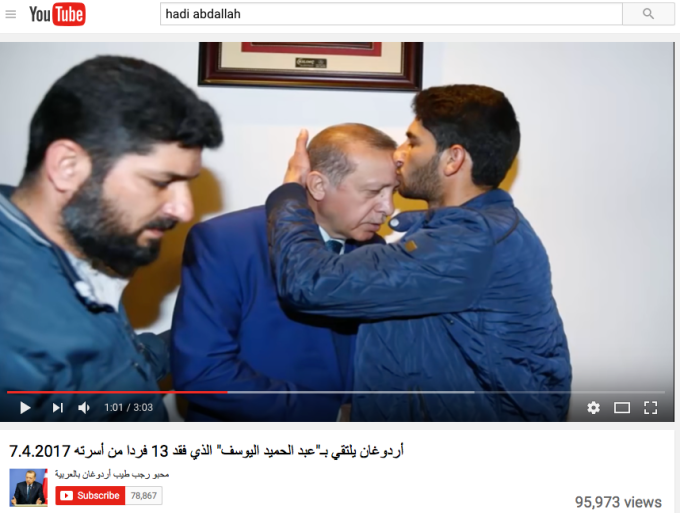 Hadi Abadallah (far left) , the lead propaganda disseminator for al-Nusra Front (al-Qaeda in Syria) and other jihadists help him reach the burial site…… 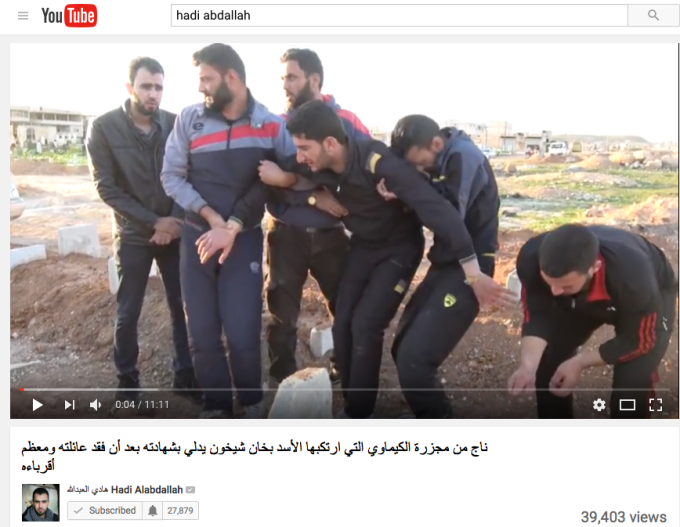 US Ambassador to the United Nations Nikki Haley gets special recognition in the account stream for providing the front…….

‘Handler’ Alaa al-Yusef provides the connections to make sure the AP is onboard…….

Thank god for close friends and family………..how else would one get through the drama of it all? NBC News was more than happy to present the narrative with no investigation whatsoever. A simple Facebook search would have provided them access to the same information and images that are in this Clarity of Signal post. 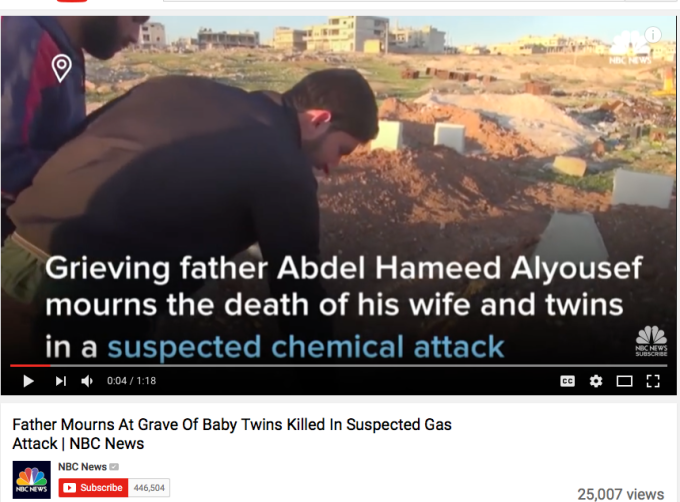 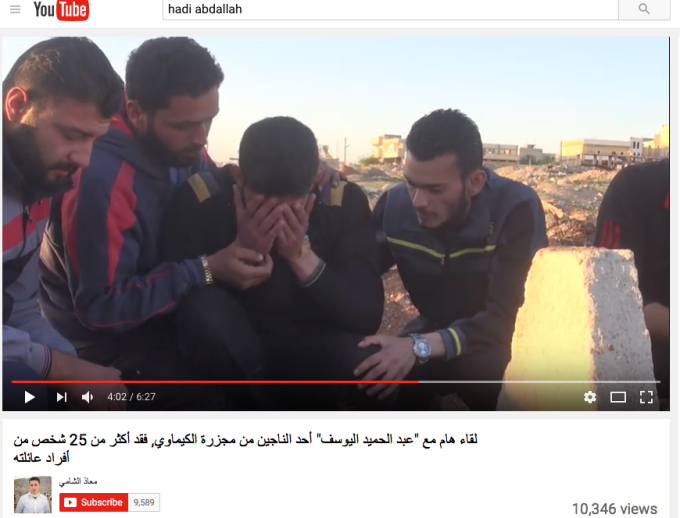 The following images and videos feature the portrayed victim Abdel Hamid Yusef with Hadi Abadallah who is one of the most well-known propaganda disseminators for the terrorist groups in Syria. He has been photographed on numerous occasions alongside Abdullah al-Muhaysini, the leader of al-Nusra Front in Syria, and he is also one of the main subjects of the “Tapestry of Terror” video documentary on the fake White Helmets and various ruses related to the western and Gulf State projected war on Syria.

Link to Clarity of Signal full expose’ on terrorist Hadi Abadallah…….(note that he was also one of the first ‘reporters’ to arrive at the Idlib Chemical Event on April 4, 2017).

A few al-Nusra Front images and videos show him for the terrorist he really is……. 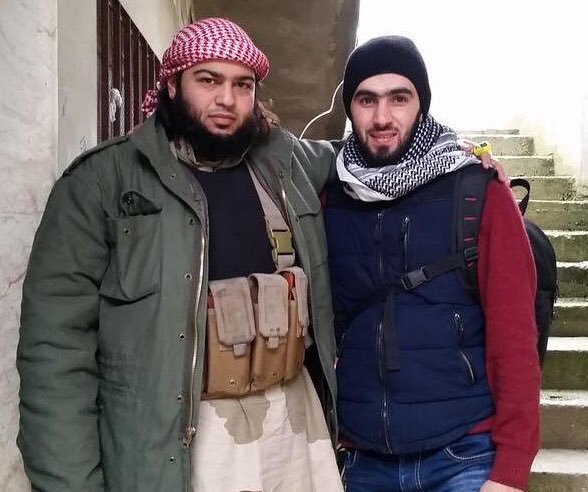 Link to Hadi Abdallah’s You Tube channel……..note that this terrorist is given free rein to post content on You Tube.

Reporters Without Borders (RSF), TV5 Monde France and the U.S. Embassy Syria apparently like the way he rolls and the company he keeps, as they have provided awards and accolades for his pro-terrorist ‘reporting’ in Syria.

Account links and information……(Note that some items have been scrubbed over the last 24 hours since I started putting this post together. Items that are scrubbed I will provide a screenshot of the address and message now received for the address.

Abdel Hamid Yusef Facebook Account – Note that some images have been removed over the last 24 hours. He appears not to have currently gone under the profile pictures Albums setting and deleted those incriminating images as they are currently still there. Here’s a screen cap of what is still there as of May 2nd, 2017.

Looks like some items are being scrubbed between May 1st and 2nd as I get this post together. I think I made it in through the window though and have caught plenty of evidence of what they are really up to.

Note the following now appears at his brother Mohammad’s account when info is input…..

That link is to this photo……

This address now leads to the message below….

For this post I have chosen not to provide my opinion of exactly what happened at Idlib on April 4th, 2017. Instead I will simply provide viewers with some important links and video so that folks can research and come to their own conclusions.

One of the best places online to attain info on the April 4, 2017 chemical event in Idlib, Syria is the “A Closer Look on Syria” website. Numerous images, videos and witness testimonies of the entire event are cached there, as well as sun azimuths (for time specification), location and area mapping, explanations of involved characters, camera angle analysis, chemical expert analysis and so forth. I highly recommend this excellent resource.

Caveat: The Clarity of Signal website worked in conjunction with A Closer Look on Syria website in order to ascertain the material for this entire post. We colluded and discussed images and involved parties in order to determine exact personnel and responsibilities related to the April 4, 2017 alleged chemical attack. A Closer Look on Syria operates out of Finland and Clarity of Signal is US based. Suffice it to say, we are not Putin Trolls, we are concerned global citizens who have taken a responsibility to help humanity see what is really going on in the world. We encourage others to do the same.

A Closer Look on Syria links –

Peter Ford says he believes it is “highly unlikely” that Russia or the Assad regime was behind the attack in Idlib.

Published on Apr 6, 2017
Exclusive interview with British Journalist Tom Duggan in Damascus at the French Hospital tells us about the chemical attacks accusations.
Interview conducted by Hanin Elias

A Critique of ‘False and Misleading’ White House Claims About Syria’s Use of Lethal Gas -Theodore A. Postol – Professor Emeritus of Science, Technology and National Security Policy at MIT/ Weapons Specialist

Explanation of Sarin symptoms and analysis of biological effects on human bodies show April 4 Syrian chemical massacre victims were not affected by Sarin nerve agent as US media reported.

MOSCOW, April 20. /TASS/. No serious steps have been taken to investigate into the alleged chemical incident in Syria’s Khan Shaykhun, Director of the Armaments Non-Proliferation and Control Department at the Russian Foreign Ministry Mikhail Ulyanov said.

The text of his address to the special session of the Organization for the Prohibition of Chemical Weapons (OPCW), held in The Hague on April 19, has been published on the ministry’s website on Thursday.

“Reports (about the alleged chemical attack in Khan Shaykhun) started coming 15 days ago but no steps have yet been taken in order to investigate into this incident,” he said. “In any case, we did not hear about representatives of the OPCW visiting the Khan Shaykhun area.”

Link to Tapestry of Terror Documentary that reveals White Helmets as terrorists, as well as numerous Syrian war ruses being propagated via western media.