On April 15th 2017, the people of Kafarya and Foua were attacked, their children mown down deliberately, by a suicide bomb or expolosive detonation, that targeted these innocent children who had been lured to their deaths by NATO and Gulf state terrorists, including Ahrar al Sham and Nusra Front (Al Qaeda). Mothers had to watch from behind the windows of the buses they had been imprisoned in for 48 hours, while strangers, terrorists, picked up their children, their wounded, bleeding, mutilated children, and piled them up in the backs of trucks and Turkish ambulances before driving them away from the horrific scene and stealing them from their distraught, powerless mothers. 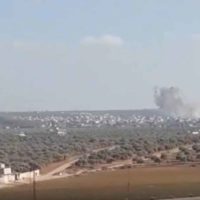